We’re happy to share that our very own founder has been recognized as one the 100 Top Women of Influence in MyVegas Magazine! Read what they published here: 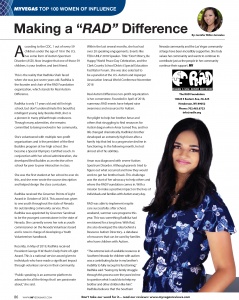 According to the CDC, 1 out of every 59 children under the age of 18 in the U.S. has some form of Autism Spectrum Disorder (ASD). Now imagine that one of those 59 children, is your brother, and best friend.
This is the reality that Radhika Shah faced when she was just seven years old. Radhika is the founder and chair of the RAD Foundation organization, which stands for Real Autism Difference.
Radhika is only 17 years old and still in high school, but don’t underestimate this beautiful, intelligent young lady. Besides RAD, she’s is a pioneer in many philanthropic endeavors. Through many adversities, she remains committed to being involved in her community.
She’s volunteered with multiple non-profit organizations and is the president of the Best Buddies program at her high school. She became a Special Olympics Certified coach. In conjunction with her school administration, she developed Best Buddies as an elective at her school for peer to peer interaction in class.
She was the first student at her school to ever do this, and she even wrote the course description and helped design the class curriculum.
Radhika received the Governor Points of Light Award in October of 2018. This award was given to one youth throughout the state of Nevada for outstanding community service. Then Radhika was appointed by Governor Sandoval to be the youngest commissioner in the state of Nevada. She currently serves her role as youth commissioner on the Nevada Volunteers board and is now in charge of developing a Youth Volunteerism handbook.
Recently, in May of 2019, Radhika received President George H.W. Bush’s Daily Point of Light Award. This is a national service award given to individuals who have made a significant impact through volunteer service in their community.
“Public speaking is an awesome platform to advocate for all the things that I am passionate about,” she said.
Within the last several months, she has had over 20 speaking engagements. Events like TEDx UNLV 2018 Speaker- Title: “Don’t Worry, Be Happy,” World Peace Day Celebration, and the Clark County School District Special Education Facilitator Forum. She was also selected to be a panelist at the U.S. Autism and Asperger Association Annual World Conference November 2018
Real Autism Difference non-profit organization is her cornerstone. Founded in April of 2018, numerous RAD events have helped raise awareness and resources for Autism.
Her plight to help her brother Amar and others that struggling to find resources for Autism began when Amar turned five, and her life changed dramatically. Radhika’s brother developed an extremely high fever after a family trip that led to a progressive decline in functioning. In the following month, he lost almost all of his abilities.
Amar was diagnosed with severe Autism Spectrum Disorder. Although parents tried to figure out what occurred and how they would work to get her brother back. This challenge was the start of her advocacy to help others and where the RAD Foundation comes in. With a mission to make a positive impact on the lives of individuals and families with Autism every day.
RAD was able to implement respite care successfully: after school, weekend, summer care programs this year. This was something Radhika had envisioned for a long time. With Rad, she also developed the idea behind a Resource Autism Directory- a database of resources that can be used by families who have children with Autism.
“The extreme lack of available resources in Southern Nevada for children with autism was a contributing factor in my brother’s inability to fully recoup his functioning,” Radhika said. “Seeing my family struggle through this process over the years led me to question what I could do to help my brother and other children like him.”
Radhika believes that the Southern Nevada community and the Las Vegas community at large have been incredibly supportive. She truly values her community and wants to continue to contribute just as the people in her community continue their support. MV
The RAD Foundation
10624 S Eastern Ave, #A-425
Henderson, NV 89052
Phone: 702.463.6723
info@radlv.org

Fill out the fields below and we’ll get back to you as soon as possible!